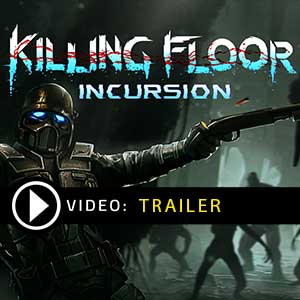 It's a digital key that allows you to download Killing Floor Incursion directly to PC from the official Platforms.

How can I find the best prices for Killing Floor Incursion CD keys?

Allkeyshop.com compares the cheapest prices of Killing Floor Incursion on the digital downloads market to find the best sales and discount codes on trusted stores.

Killing Floor: Incursion is an action video game that is developed and published by Tripwire Interactive.

Enjoy this story-driven multi-chapter adventure that is specifically made for VR. This immersive detailed world can be explored alone or with a partner. Get to survive by fighting for your life by using pistols, shotguns, axes, or even leftover limbs. There will be diverse environments like scary deep catacombs to mysterious farmhouses. Go through them to find out who or what is behind the Zed Menace.

Featuring a co-op play for both Story and Holdout Modes. Also, offering a five-stage narrative campaign where you can uncover the secrets of Horzine and the Zeds.

Enjoy an Endless Mode called Holdout where tough groups of Zeds are thrown at you until you give in. The best part is that a new weapon and power up, as well as other mechanics, are available in this mode.

There are five different environments to explore, each with their own story like the high-tech virtual training facilities to dilapidated trailer parks.

The cherry on top would be the game’s gore! As you attack the Zeds they wouldn’t just die, they would be decapitated with limbs flying and blood scattered everywhere. You can use them to your advantage though as spare limbs are great weapons.

EU STEAM CD KEY: Requires an EUROPEAN IP address or you must activate it with a VPN (Virtual Private Network) in order to play Killing Floor Incursion. Might have languages restrictions or language packs. Read the description on the store game page to know if the EU IP is only needed for activation or for playing also (maybe on EU Servers). Most of the stores offer you their help, or show you how to do this with a tutorial to follow.
EUROPEAN STEAM GIFT : It’s a steam gift for Europe which requires an European IP address to activate and to play Killing Floor Incursion on Steam. Read carefully the store description about region and language restrictions.
STEAM CD KEY : Use the Steam Key Code on Steam Platform to download and play Killing Floor Incursion. You must login to your Steam Account or create one for free. Download the (Steam Client HERE). Then once you login, click Add a Game (located in the bottom Left corner) -> Activate a Product on Steam. There type in your CD Key and the game will be activated and added to your Steam account game library.
Standard Edition