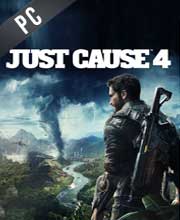 What is Just Cause 4 CD key?

It's a digital key that allows you to download Just Cause 4 directly to PC from the official Platforms.

How can I find the best prices for Just Cause 4 CD keys?

Allkeyshop.com compares the cheapest prices of Just Cause 4 on the digital downloads market to find the best sales and discount codes on trusted stores.

Just Cause 4 is an action–adventure video game that is developed by Avalanche Studios and published by Square Enix.

Play as Rogue agent Rico Rodriguez and journey to a huge South American world named Solis. This place is extreme with conflict, oppression and very extreme weather conditions. You must hunt down the truth to Rico’s past at any cause. So strap on your trusty wingsuit and get your fully customizable grappling hook and you are off to war!

Get to enjoy creative destruction by customizing your grappling hook with evolved and brand new capabilities. Create your own stunts and destructive methods and overall playstyle. New vehicles can be experienced from military jets, helicopters, turbo fueled sports cars and construction vehicles.

Your ultimate mission is to lead the rebellion and defeat the Black Hand which is a hi-tech private military organization.

You will play in a huge exotic map 1024 square kilometers to be exact. There will be reinforcements, deserts, and snowy mountain peaks.

Bring the thunder with Just Cause 4!

Gold: The game + The Expansion Pass + The Digital Deluxe Content + The Golden Pack

The introduction to the game will throw you into a fiery skirmish with Black Hand and immediately let you know how the gameplay shooting segment has improved significantly. Aside from the feel of the shot itself and the ability to zoom in, much of it relates to the functionality of the weapon. For some weapons, a completely new concept has been devised while others have already been seen in previous games. Thus e.g. we have a machine gun that in alternative mode ejects a shield that will repel all fire at the cost of inability to move, a grenade launcher that can fire an entire tank at once or my favorite smart rifle with which you can mark opponents that it will shoot itself. Vehicles have not been neglected either. However, even though the driving model has been improved, you will often feel that the vehicles are too light and easily destroyed. Speeding up hills will often result in unwanted flying, and jumping out of a car at any speed will mostly result in its explosion as soon as it touches an obstacle. Regardless of the above, the offer of vehicles is diverse and it is often fun to use them, especially if they are armed. Thus, the use of helicopters and airplanes will make you practically indestructible. Avalanche, however, came up with this fact in such a way that such vehicles no longer have unlimited ammunition, which is a somewhat strange decision for a game in which destruction is the main source of entertainment.
Rico himself is less vulnerable than ever before. Whatever damages it, be it bullets, rockets or a fall from a building - its energy is regenerated in just a few seconds. The combination of that fact and fun weapons will allow you to always be face to face with explosions, which will lead to truly impressive "blockbuster" action moments at every turn.

This is supported by the return of all the tools that Rico uses to move around the world. I’m talking of course about the hook, parachute and wingsuit that you’ll most often combine in traversing the great distances that the game puts in front of you. You will, however, mainly use the parachute for precise hovering and shooting at the desired target, and the wingsuit will be the main tool for accelerated movement on the map. In both cases, you will be able to accelerate further with the hook.
The function of the hook itself is significantly expanded in this continuation. You will be able to connect two objects with it and attract them with different levels of intensity. Furthermore, you will be able to attach several balloons to an object, which will lift and hold them in the air. The third option is where you will be able to glue small motors to objects and launch them in the desired direction. You can modify the operation of each of these options and combine them to suit your style of play. Although the game tries to show you their practical application, in the heat of battle you will use only the first function. Balloons and engines will mostly remain reserved for "quiet" moments when you want to experiment with unrealistic physics and create your own fun and funny situations for which the game will very often give you context.
When the game starts you up when you start, you think that you actually chose a low level of detail instead of ultra graphics settings - you know something is wrong. Just Cause games have always been a kind of eye balm due to the combination of large maps and graphic resolution with which the very act of moving around the world was a pleasure. Just Cause 4 in many ways did not continue that trend. By far the biggest problem is the inconsistency of the graphic quality.
Just Cause 4 is just another sequel in the series, but that doesn’t erase the fact that it’s fun in the first place. Improvements in the mechanics of using the hook and the addition of new toys and a time system make the experience of playing in its sandbox better than in previous games. But while on the one hand you will be delivered everything you love,

this is really the best anti stress and also relaxing game to play after work!

0
Review Just Cause 4 See all 2 reviews

Just Cause 4 tries to be more serious and in some aspects change the formula of its predecessors, but ultimately relies again on an old trick – explosive fun.

I am raising money for Anthem but if Just casue 4 will get a price drop this winter, I will buy it. It looks very polished.

The game has really interesting approach to the gaming process, can’t wait to try it out.

Come with me and take my hand, go to fly with a rocket launcher et get some blood with a mad cow on them Ba*****d dictators!
HF for sure

MINE! I love the JC series, but this chapter… seems the best of all! .