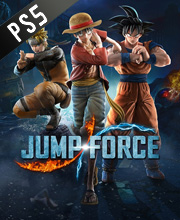 What is Jump Force Game Code?

It's a digital key that allows you to download Jump Force directly to Playstation 5 from PSN (PlayStation Network).

How can I find the best prices for Jump Force on Playstation 5 ?

Jump Force is a fighting game developed by Bandai Namco entertainment featuring an all-star cast of characters from one of the most famous manga company Shonen jump. Make your own avatar and join them as they fight a new dangerous enemy threatening our world in the games story mode or fight with your favorite characters in the online matchmaking system.