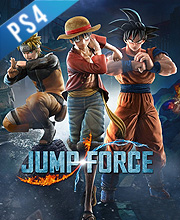 What is Jump Force Game Code?

It's a digital key that allows you to download Jump Force directly to Playstation 4 from PSN (Playstation network).

Jump Force is a fighting game developed by Bandai Namco entertainment featuring an all-star cast of characters from one of the most famous manga company Shonen jump. Make your own avatar and join them as they fight a new dangerous enemy threatening our world in the games story mode or fight with your favorite characters in the online matchmaking system.

What this game is really about is fan service and I must admit that it succeeds in offering folks up a hefty chunk in that department. Jump Force knows that it’s really for the Shonen Jump fans and if you are a fan there’s plenty to like here. One would probably be better off focusing on the core fighting game aspects though.

Jump Force is a worthy celebration of the legacy of Shonen Jump manga, but it honors its source material a little too well with how filler-heavy the middle of its story arc is.

A physical copy of the game and several collector items.

This edition contains the base game and the character pass.

For big fans of the franchise, this edition comes with multiple in-game items and the first character pack DLC.

Hiei a demon and the shortest of the four main characters of Yu Yu Hakusho was originally introduced as a villain for Yusuke but they become allies later on in the story when their interests align and when he discovers his long-lost sister Yukina is being held, hostage by a human.

All Might is a symbol of justice and the world’s number one hero in My Hero Academia, but after getting irreversible injured from a villain fight he decides to pass on his quirk One For All to a young Izuku Midoriya and mentor him into replacing him one day as the new symbol of justice.

Find all the best prices for Jump Force DLCs on Allkeyshop!

I wasn’t sure who the punches hurt more: the characters fighting or my brain when I see some imperfections on the screen.

Jump Force brings an exciting roster of famous and lesser known characters from various anime franchises, from Dragon Ball, Bleach, Naruto all the way to One Piece and My Hero Academie.

Hello there,
Awesome game fantastic ps4 game nothing to say again about this game