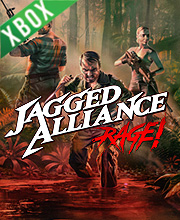 You can participate to these tests by adding comments about your XBox One Game Code purchase in the store review page. Enjoy the best deals for Jagged Alliance Rage Game Code with Allkeyshop !

Jagged Alliance Rage! is a spin-off from the Jagged Alliance series that features turn-based tactical combat combined with adventure elements. It was developed by Cliffhanger Productions and published by HandyGames.

Rage! is set 20 years after the first Jagged Alliance where players will need to face off with a drug overlord and his crazed army. Approach combat your way, be it through stealth or brute force. Meet different characters, each with their own skills, desires, personal conflicts, and Rage skills. Use highly experimental drugs to manipulate enemies, employ guerilla tactics to overcome being outnumbered, and deal with powerful commanders that dictate the way enemy troops behave on the battlefield. You can also invite a friend in online co-op.

Be the first one to write a review about Jagged Alliance Rage !