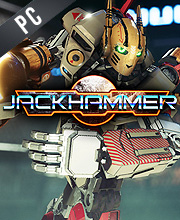 What is JackHammer CD key?

It's a digital key that allows you to download JackHammer directly to PC from the official Platforms.

How can I find the best prices for JackHammer CD keys?

Allkeyshop.com compares the cheapest prices of JackHammer on the digital downloads market to find the best sales and discount codes on trusted stores.

JackHammer: Demolition Dodgeball is an action, sports video game that is published and developed by Mission Ctrl Studios.

A fast-paced FPS experience where you are unfortunately enlisted to fight in a savage game of survival against other athletes in an arena that is broadcasted around the world and watched by a paying audience.

The only thing that will save you in this arena of death is quick reactions and reflexes.

This is the not so distant future where the International Robotics Combat Association is formed by military tech corporations. Here, they are pitting their humanoid weapons against each other. The state-of-the-art robots have the ability to launch iridium-alloy MurderBalls for their fans entertainment.

Offering a high-octane multiplayer which has fully customizable robotic armors that can blast, and grapple with other robots to get to the top spot in the online rankings.

Everything looks powerful all thanks to the Unreal Engine 4. The electronic soundtrack also compliments the hard-hitting gameplay.

STEAM CD KEY : Use the Steam Key Code on Steam Platform to download and play JackHammer. You must login to your Steam Account or create one for free. Download the (Steam Client HERE). Then once you login, click Add a Game (located in the bottom Left corner) -> Activate a Product on Steam. There type in your CD Key and the game will be activated and added to your Steam account game library.
Early Access