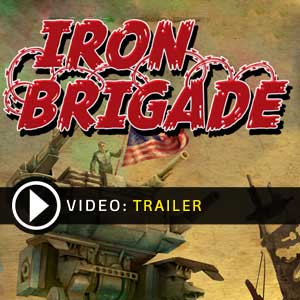 What is Iron Brigade CD key?

It's a digital key that allows you to download Iron Brigade directly to PC from the official Platforms.

How can I find the best prices for Iron Brigade CD keys?

Allkeyshop.com compares the cheapest prices of Iron Brigade on the digital downloads market to find the best sales and discount codes on trusted stores.

The framework is a rivalry between two former soldiers reconverted to scientists, using ingenuity to fight on board metal bipeds. This game is enjoyed most with parties in multiplayer, up to four, by deploying tactical tower defense and hack and slash order to resist frenzied waves of enemies, each more wacky then the next.

The tactics can vary and adopt to the different characters which are a well armed soldier or technician who will provide logistics, offering a good variety of gameplay. The game pulls out from its competitors thanks to its founder, who is none other than Tim Schafer, one of the most emblematic figures of the golden age of LucasArts.

His success was assured by funny context and especially in a crazy world that appealed to several generation of players and that continues in this way. This game guarantees good times to spend playing it, so the mood will be set. Tacticians will not be put on the side with an impressive array of weapons and mechanisms to use. This game has everything you need to engage you in hours of entertainment and enjoyment.

EU STEAM CD KEY: Requires an EUROPEAN IP address or you must activate it with a VPN (Virtual Private Network) in order to play Iron Brigade. Might have languages restrictions or language packs. Read the description on the store game page to know if the EU IP is only needed for activation or for playing also (maybe on EU Servers). Most of the stores offer you their help, or show you how to do this with a tutorial to follow.
STEAM GIFT : A Steam gift is a one-time transfer you receive. You activate and install Iron Brigade to play on Steam, it is a non-refundable game that stays in your Steam games collection. Please read the store description about any language or region restrictions.
STEAM CD KEY : Use the Steam Key Code on Steam Platform to download and play Iron Brigade. You must login to your Steam Account or create one for free. Download the (Steam Client HERE). Then once you login, click Add a Game (located in the bottom Left corner) -> Activate a Product on Steam. There type in your CD Key and the game will be activated and added to your Steam account game library.
Bundle
Standard Edition
Compare Choose & Buy Download (710)