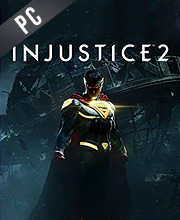 What is Injustice 2 CD key?

It's a digital key that allows you to download Injustice 2 directly to PC from the official Platforms.

How can I find the best prices for Injustice 2 CD keys?

Allkeyshop.com compares the cheapest prices of Injustice 2 on the digital downloads market to find the best sales and discount codes on trusted stores.

Level up and build your ultimate DC team for battle in Injustice 2! Created by the developers of the classic Mortal Combat game series, experience the ultimate clash of heroes and villains in this exciting fighting game!

Though it didn’t launch day and date with the console versions, Injustice 2 remains a solid fighting game for PC players. The fighting system is a marked improvement over the original, and the online performance is solid, but the single-player content and loot system are what will keep people playing. There’s so much content here that those who aren’t interested in playing online will still feel like they got their money’s worth. Fighting fans and those who enjoy the DC universe should definitely own this game.

Despite a few performance hiccups we encountered and the absence of a few of the more fun console perks or events, Injustice 2 on PC is a much better port than the first game or Mortal Kombat X. And a good thing too, because Injustice 2 is a superb fighting game. Combat is satisfying and is just as accessible to casual fans as professionals, and there’s an absolute wealth of content both online and offline that could keep you playing forever. The story mode is an absolute blast, with fun writing, acting and amazing facial animation, and sports a far better villain than the Justice League movie. Injustice 2 is by far the best fighting game this year, and may very well be the best fighting game on PC.

Buy this edition and get these:

The Ultimate Edition gets you these:

Get this DLC to get:

Buy this DLC and get:

Buy this DLC and:

Buy this DLC to get:

Buy this DLC to get:

Buy this DLC to:

Find all the best prices for Injustice 2 DLCs on Allkeyshop!

Even if you are a fan of Marvel, you just can’t avoid this one and the effort they put into it, especially if you enjoy fighting games.

As a huge fun if fighting games and DC and MARVEL support fanbase, must admit that this game was just great.

As a DC fan, i loved this. Got the game for about 7 euros, and recieved the working key instantly.