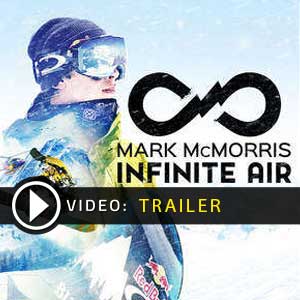 What is Infinite Air with Mark McMorris CD key?

It's a digital key that allows you to download Infinite Air with Mark McMorris directly to PC from the official Platforms.

How can I find the best prices for Infinite Air with Mark McMorris CD keys?

Allkeyshop.com compares the cheapest prices of Infinite Air with Mark McMorris on the digital downloads market to find the best sales and discount codes on trusted stores.

Infinite Air with Mark McMorris is a simulation sports video game developed by HB Studios and published by Maximum Games.

An all new snowboarding video game is here. It is great for newbies and for the veteran snowboarders as well. Join in and ride with the pros with Infinite Air. Get to have awesome runs in the backcountry or in the park, it is your choice.

Be able to build your very own terrain parks by adding jumps, cliffs, ramps, rails and so much more to make your runs more challenging. You can also invite your friends to take on your personalized tracks in real-world competitions like Big Air and Slopestyle.

The animations are physics driven and the analog controls smooth and fluid making the game realistic. You will definitely feel each action as you snowboard down the slopes.

Never get bored with the procedurally generated mountain slopes. Each run will be different than the last giving you an infinite number of mountains to explore.

Ready your boards and your gear because Infinite Air with Mark McMorris is riding up your way.

Zoom 1m 3m 1y All
Track product
STEAM CD KEY : Use the Steam Key Code on Steam Platform to download and play Infinite Air with Mark McMorris. You must login to your Steam Account or create one for free. Download the (Steam Client HERE). Then once you login, click Add a Game (located in the bottom Left corner) -> Activate a Product on Steam. There type in your CD Key and the game will be activated and added to your Steam account game library.
Standard Edition
Compare Choose & Buy Download (772)