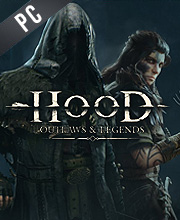 It's a digital key that allows you to download Hood Outlaws & Legends directly to PC from the official Platforms.

How can I find the best prices for Hood Outlaws & Legends CD keys?

Allkeyshop.com compares the cheapest prices of Hood Outlaws & Legends on the digital downloads market to find the best sales and discount codes on trusted stores.

Set in a medieval world play in intense PvPvE multiplayer heists. Choose your playstyle! Will you steal using stealth or be dominating with brutal combat. If you are the best, you will surely escape with the treasures.

The Year 1 Edition includes the complete game plus the year 1 Battle Pass Pack.

Zoom 1m 3m 1y All
Track product
EPIC GAMES KEY : Region Free / Worldwide. Requires Epic Games Launcher App in order to play the game. You need to create a free account here in order to download Hood Outlaws & Legends from Epic Plateform . Read the description on the store page about any language or country restrictions.
EU STEAM CD KEY: Requires an EUROPEAN IP address or you must activate it with a VPN (Virtual Private Network) in order to play Hood Outlaws & Legends. Might have languages restrictions or language packs. Read the description on the store game page to know if the EU IP is only needed for activation or for playing also (maybe on EU Servers). Most of the stores offer you their help, or show you how to do this with a tutorial to follow.
EUROPEAN STEAM GIFT : It’s a steam gift for Europe which requires an European IP address to activate and to play Hood Outlaws & Legends on Steam. Read carefully the store description about region and language restrictions.
STEAM GIFT : A Steam gift is a one-time transfer you receive. You activate and install Hood Outlaws & Legends to play on Steam, it is a non-refundable game that stays in your Steam games collection. Please read the store description about any language or region restrictions.
STEAM CD KEY : Use the Steam Key Code on Steam Platform to download and play Hood Outlaws & Legends. You must login to your Steam Account or create one for free. Download the (Steam Client HERE). Then once you login, click Add a Game (located in the bottom Left corner) -> Activate a Product on Steam. There type in your CD Key and the game will be activated and added to your Steam account game library.
STEAM KEY ROW : It means for Rest Of the World countries which are not concerned by the region restrictions. This product can't be purchased and activated in Several countries. Please read the store description to know the full list of countries which are concerned. Use the key to Download and play Hood Outlaws & Legends on Steam.
Standard Edition
Year 1 Edition
Compare Choose & Buy Download (772)

I like medieval type games, that era had me since I was a kid and been always hooked to try it.

I’ve gotta give the game 5/5 rating, had a blast while playing it. Was the first one in the World to get all characters to level 10 after the pre-release, got 50 hours in less than 3 days. That itself says how much I like the game, first patch, balance updates, coming out tomorrow, new map already announced as well as the new character and new game mode. Combat is fun, objectives are unique, would suggest to anyone who likes PVP with PVE objectives.

This game looks very nice and interesting to play.