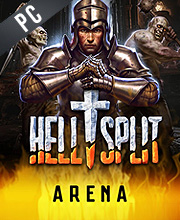 What is Hellsplit Arena CD key?

It's a digital key that allows you to download Hellsplit Arena directly to PC from the official Platforms.

How can I find the best prices for Hellsplit Arena CD keys?

Allkeyshop.com compares the cheapest prices of Hellsplit Arena on the digital downloads market to find the best sales and discount codes on trusted stores.

Hellsplit: Arena is an action, role-playing video game that is developed and published by Deep Type Games. This is a Virtual Reality game so a VR headset is needed as well as 360° tracking.

Set in the late middle ages, players will be battling with the undead in this VR horror-slasher. Step into a dark fantasy world that is gruesome as well as realistic. Your skill and endurance will be the basis of the outcome of every fight. There will be movement tactics, blunt blows, kicking, stabbing, grabs and so much more.

Offering a unique gameplay where your movements in the real world, as well as the movements of your character, are the same. Players will surely feel the heat with the battles as they are physically realistic. The weapons and equipment that you will be using are from the medieval times. Its characteristics are also as close as possible to the real prototypes.

A real-life injury system is also available where there are dismemberment and superficial wounds.

Get to enjoy the game’s campaign and additional modes. An in-game achievement system is also available.

Players would need an area of about 1.5 x 1.5 meters and the game is supposed to be played in a vertical position.

Zoom 1m 3m 1y All
Track product
EUROPEAN STEAM GIFT : It’s a steam gift for Europe which requires an European IP address to activate and to play Hellsplit Arena on Steam. Read carefully the store description about region and language restrictions.
STEAM CD KEY : Use the Steam Key Code on Steam Platform to download and play Hellsplit Arena. You must login to your Steam Account or create one for free. Download the (Steam Client HERE). Then once you login, click Add a Game (located in the bottom Left corner) -> Activate a Product on Steam. There type in your CD Key and the game will be activated and added to your Steam account game library.
Standard Edition
Compare Choose & Buy Download (772)

This game is an awesome vr experience and in my opinion even better than blade and sorcery, i really recommend it for people who have a vr headset.