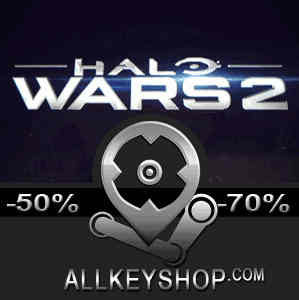 What is Halo Wars 2 CD key?

It's a digital key that allows you to download Halo Wars 2 directly to PC from the official Platforms.

How can I find the best prices for Halo Wars 2 CD keys?

Allkeyshop.com compares the cheapest prices of Halo Wars 2 on the digital downloads market to find the best sales and discount codes on trusted stores.

Halo Wars 2 is a real-time strategy video game that is developed by 343 Industries as well as Creative Assembly and is published by Microsoft Studios. This is the sequel to the game Halo Wars that came out on 2009.

Taking place in the universe of the Halo series and set during the year 2559. The crew of the Spirit of Fire ( a UNSC warship) has entered a state of cryosleep and drifted into space. The war has ended and the Spirit of Fire and all its hands were declared lost.

However, a signal from an emergency beacon from UNSC Ark wakes them up from their cryosleep. The Ark has been destroyed by the Banished and a survivor is seeking for help. Captain James Cutter, Professor Anders and the rest of the crew encounters and battles with the alien faction Banished.

Halo Wars 2 is played with a bird’s eye view of the battlefield. Commanding armies with a “rock-paper-scissors counter attack system”. The games offer a number of playable modes like skirmish, deathmatch, stronghold and domination, blitz. Multiplayer modes are available via online with up to six players!

Get your mind working with tactics and strategies in Halo Wars 2!

It’s also available on Gamivo, though it’s not in the list
https://www.gamivo.com/product/halo-wars-2-pc-xbox-one

Ok i have let the team known, thanks for the report.

More then a week passed and it’s still not updated.
Disappointing, considering that it’s the cheapest price for the product, since the offer from cdkeys.com which you keep on the first spot is out of stock.