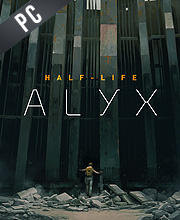 You can participate to these tests by adding comments about your digital download purchase in the store review page. Enjoy the best deals for Half-Life Alyx CD Key with Allkeyshop.com!

Half-Life Alyx is an action–adventure video game that is developed and published by Valve. A VR Headset is needed for this game.

Returning to the Half-Life series is Alyx. Get to play as Alyx Vance who is fighting against the alien race called Combine. Alyx is set between the events of Half-Life and Half-Life 2.

The Combine has taken control of the planet and was able to round up the remaining humans into cities. One of which is where two of the greatest scientists live, and they are you and your father Dr. Eli Vance.

You and your father are the founders of a small resistance group. As you learn more about your enemies, the Combine, the more you get to know how to defeat them. You can use the critical research that you were able to get to create tools for those who are brave enough to face the enemy.

EU STEAM CD KEY: Requires an EUROPEAN IP address or you must activate it with a VPN (Virtual Private Network) in order to play Half-Life Alyx. Might have languages restrictions or language packs. Read the description on the store game page to know if the EU IP is only needed for activation or for playing also (maybe on EU Servers). Most of the stores offer you their help, or show you how to do this with a tutorial to follow.
EUROPEAN STEAM GIFT : It’s a steam gift for Europe which requires an European IP address to activate and to play Half-Life Alyx on Steam. Read carefully the store description about region and language restrictions.
STEAM CD KEY : Use the Steam Key Code on Steam Platform to download and play Half-Life Alyx. You must login to your Steam Account or create one for free. Download the (Steam Client HERE). Then once you login, click Add a Game (located in the bottom Left corner) -> Activate a Product on Steam. There type in your CD Key and the game will be activated and added to your Steam account game library.
STEAM GIFT : A Steam gift is a one-time transfer you receive. You activate and install Half-Life Alyx to play on Steam, it is a non-refundable game that stays in your Steam games collection. Please read the store description about any language or region restrictions.
Standard Edition. Read the store description to know the content.

Be the first one to write a review about Half-Life Alyx !