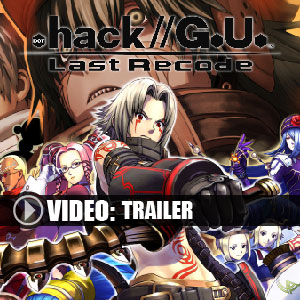 It's a digital key that allows you to download .hack//G.U. Last Recode directly to PC from the official Platforms.

How can I find the best prices for .hack//G.U. Last Recode CD keys?

Allkeyshop.com compares the cheapest prices of .hack//G.U. Last Recode on the digital downloads market to find the best sales and discount codes on trusted stores.

.hack//G.U. Last Recode is a role-playing video game that is developed by CyberConnect2 and published by Bandai Namco Entertainment.

This is a collection of all the original .hack//G.U. games, namely Rebirth, Reminisce, and Redemption. All three are fully remastered and restored. In addition to this is a new version called .hack//G.U. Reconnection.

Get to log back into the world of .hack//G.U. as Haseo. Help him track down the Tri-Edge this time with enhanced graphics, new modes as well as improved gameplay.

Each game in the collection is fully restored and remastered. Gameplay is graphically enhanced with cutscenes running in 1080p and 60fps.

The game’s system features have also been improved. It now has enhanced battle balance and game-pacing. All of these are done to provide the optimal experience for both the old fans and the new players of the game.

Bring back the fun memories or experience the game for the first time surely you will have fun playing .hack//G.U. Last Recode.

STEAM CD KEY : Use the Steam Key Code on Steam Platform to download and play .hack//G.U. Last Recode. You must login to your Steam Account or create one for free. Download the (Steam Client HERE). Then once you login, click Add a Game (located in the bottom Left corner) -> Activate a Product on Steam. There type in your CD Key and the game will be activated and added to your Steam account game library.
EU STEAM CD KEY: Requires an EUROPEAN IP address or you must activate it with a VPN (Virtual Private Network) in order to play .hack//G.U. Last Recode. Might have languages restrictions or language packs. Read the description on the store game page to know if the EU IP is only needed for activation or for playing also (maybe on EU Servers). Most of the stores offer you their help, or show you how to do this with a tutorial to follow.
STEAM KEY ROW : It means for Rest Of the World countries which are not concerned by the region restrictions. This product can't be purchased and activated in Several countries. Please read the store description to know the full list of countries which are concerned. Use the key to Download and play .hack//G.U. Last Recode on Steam.
EUROPEAN STEAM GIFT : It’s a steam gift for Europe which requires an European IP address to activate and to play .hack//G.U. Last Recode on Steam. Read carefully the store description about region and language restrictions.
Standard Edition. Read the store description to know the content.

Be the first one to write a review about .hack//G.U. Last Recode !