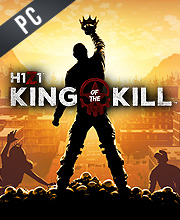 What is H1Z1 King of the Kill CD key?

It's a digital key that allows you to download H1Z1 King of the Kill directly to PC from the official Platforms.

How can I find the best prices for H1Z1 King of the Kill CD keys?

Allkeyshop.com compares the cheapest prices of H1Z1 King of the Kill on the digital downloads market to find the best sales and discount codes on trusted stores.

H1Z1: King of the Kill is an action, adventure, massively multiplayer video game developed and published by Daybreak Game and Company.

H1Z1: King of the Kill is a large scale PvP which is absolutely chaotic and enjoyable. It is a high intensity, arena-style grudge match that will make you fight until the death. To determine your fate you can only rely on your skill, wit and a little bit of luck to win.

Choose from different modes like Battle Royale, Ignition and join the Tournaments.

Battle Royal will have the player being parachuted in and instantly grabbing weapons and gear and getting ready for action at the blink of an eye. With the toxic gas sirens wailing in the background, you must watch out for other players that are out to get you and at the same time keeping an eye on the deadly gases. The rule of the land is to kill or be killed.

Ignition is a twisted time trial where the players get to ride a cool ATV. The players are outfitted with an explosive device that will blow you up unless you reach the specific safe zones. You must travel from safe zone to safe zone before the time ticks away.

The game is highly competitive with its tournaments. Join online or in-person tournaments to win fame and glory as well as prizes. There must only be one winner, so you must fight to the death and stand alone on top.

Zoom 1m 3m 1y All
Track product
STEAM CD KEY : Use the Steam Key Code on Steam Platform to download and play H1Z1 King of the Kill. You must login to your Steam Account or create one for free. Download the (Steam Client HERE). Then once you login, click Add a Game (located in the bottom Left corner) -> Activate a Product on Steam. There type in your CD Key and the game will be activated and added to your Steam account game library.
Standard Edition
Compare Choose & Buy Download (772)

Wonder if this game is worth buying instead of PUBG? Ppl say its ok.

This is a great game for you if you like to play survival games! Great action and really cheap!!!

If you are searching for a survival game this is the best one!

Is this game something like unlknownplayers battleground? A friend says it is good. Should I buy it?