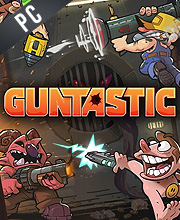 What is Guntastic CD key?

It's a digital key that allows you to download Guntastic directly to PC from the official Platforms.

How can I find the best prices for Guntastic CD keys?

Allkeyshop.com compares the cheapest prices of Guntastic on the digital downloads market to find the best sales and discount codes on trusted stores.

Guntastic is an action video game that is developed and published by Ludicrous Games.

Paying homage to the 16bit coin-op of the past, Guntastic offers a lot of mayhem, gore, yelling and shooting! The game is a single-screen couch and online multiplayer shooter. There can be up to four players battling it out in the matches over different levels that change after every round.

Get to play in fast-paced, one-shot, one-kill combat. There are a lot of weapons to choose from to eliminate your enemies. The game has easy controls, that is why it is easy to learn, however, it is hard to master as the gameplay possibilities are so rich that no two matches are the same.

The visuals and soundtrack are over-the-top retro! Get to enjoy the 16-bit era that came from that time’s movies and video games.

Levels are dynamic and they change every few rounds, this will give you the chance to get your opponents in spectacular ways.

STEAM CD KEY : Use the Steam Key Code on Steam Platform to download and play Guntastic. You must login to your Steam Account or create one for free. Download the (Steam Client HERE). Then once you login, click Add a Game (located in the bottom Left corner) -> Activate a Product on Steam. There type in your CD Key and the game will be activated and added to your Steam account game library.
Standard Edition