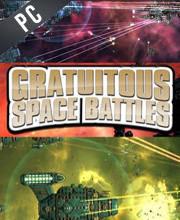 It's a digital key that allows you to download Gratuitous Space Battles directly to PC from the official Platforms.

How can I find the best prices for Gratuitous Space Battles CD keys?

Allkeyshop.com compares the cheapest prices of Gratuitous Space Battles on the digital downloads market to find the best sales and discount codes on trusted stores.

Gratuitous Space Battles is a sci-fi-themed auto battler game developed by Positech Games, instead of boring you with all the backstories, resource gathering, diplomacy GSB puts you right into the action with large, completely unjustified space battles between huge opposing fleets. You are the supreme space admiral, tasked with designing individual ships, managing their compositions and formations in battle but once you placed them you cannot control your ships directly during combat. This is not a game about twitch reflexes like many RTS games it’s about careful planning, thought, and big picture strategy.

In the end, for all its talk of being “gratuitous,” Gratuitous Space Battles is actually quite a lean, mean game with a unique premise and singularly charming personality. If you’re even marginally interested in seeing heavily armed tin cans tear each other a new hull breach with beam lasers and torpedo missiles, give it a try.

I do like Gratuitous Space Battles. I think it’s a great concept, beautifully presented. I just wish it would let me like it more.

The parasites are a new race you can play in Gratuitous Space Battles, they are a race of parasites that invade other species bodies and make them host for their larvae there are 10 new ships available to them 4 Cruisers, 3 Frigates, and 3 fighters with their own distinct graphical style.

Zoom 1m 3m 1y All
Track product
STEAM CD KEY : Use the Steam Key Code on Steam Platform to download and play Gratuitous Space Battles. You must login to your Steam Account or create one for free. Download the (Steam Client HERE). Then once you login, click Add a Game (located in the bottom Left corner) -> Activate a Product on Steam. There type in your CD Key and the game will be activated and added to your Steam account game library.
Standard Edition
Compare Choose & Buy Download (772)