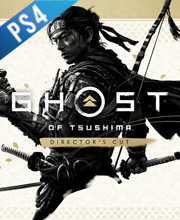 What is Ghost of Tsushima DIRECTOR’S CUT Game Code?

It's a digital key that allows you to download Ghost of Tsushima DIRECTOR’S CUT directly to Playstation 4 from PSN (Playstation network).

Allkeyshop.com compares the cheapest prices of Ghost of Tsushima DIRECTOR’S CUT on the digital downloads market to find the best sales and discount codes on trusted stores.

Ghost of Tsushima DIRECTOR’S CUT is a remastered re-release of Ghost of Tsushima it has a plethora of new features remastered graphics and audio for the PS5 version, a new free update for the Legends multiplayer game mode, Full Lip-syncing for the Japanese Dub for the PS5, a full expansion called Iki Island. 1274, feudal Japan. The Mongol Army has arrived at Tsushima Island on their way to conquer Japan. As Jin Sakai, a samurai warrior and nobleman, you’ll have to go beyond the way of the Bushido and become a Ghost to reclaim your home.