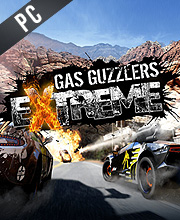 It's a digital key that allows you to download Gas Guzzlers Extreme directly to PC from the official Platforms.

How can I find the best prices for Gas Guzzlers Extreme CD keys?

Allkeyshop.com compares the cheapest prices of Gas Guzzlers Extreme on the digital downloads market to find the best sales and discount codes on trusted stores.

Gas Guzzlers Extreme is an actioned packed arcade-style racing game, where you drive dangerous vehicles armed to the teeth with high caliber weapons as you try to reach the finish line first and knock out as many of your competition as you possibly can. It features a ton of customizable vehicles, different types of weapons, branching upgrade trees, varied environments, and on-track bonus objectives.

I still cannot begin to tell you why I love Gas Guzzlers so much. I think it stems from the feeling of combining all my favorite obscure and popular racing games over the years and rolling them into one experience. It has been a long time since I really sank a lot into a car combat title that didn’t infuriate me.

This game is a welcome addition to the combat racing genre and although it adds nothing new to it, it holds up well against games like Twisted Metal. This genre is severely under-served on the PC and I encourage anyone who enjoyed the likes of Interstate-76 to pick this game up.

This Edition of Gas Guzzlers Extreme includes four copies of the base game to share with your friends.

Zombies have taken over the world of Gas Guzzlers Extreme this DLC introduces new zombie enemy types and completely changes the game with new ragdoll physics, Body parts flying around, and zombie AI.

Zoom 1m 3m 1y All
Track product
EU STEAM CD KEY: Requires an EUROPEAN IP address or you must activate it with a VPN (Virtual Private Network) in order to play Gas Guzzlers Extreme. Might have languages restrictions or language packs. Read the description on the store game page to know if the EU IP is only needed for activation or for playing also (maybe on EU Servers). Most of the stores offer you their help, or show you how to do this with a tutorial to follow.
STEAM GIFT : A Steam gift is a one-time transfer you receive. You activate and install Gas Guzzlers Extreme to play on Steam, it is a non-refundable game that stays in your Steam games collection. Please read the store description about any language or region restrictions.
STEAM CD KEY : Use the Steam Key Code on Steam Platform to download and play Gas Guzzlers Extreme. You must login to your Steam Account or create one for free. Download the (Steam Client HERE). Then once you login, click Add a Game (located in the bottom Left corner) -> Activate a Product on Steam. There type in your CD Key and the game will be activated and added to your Steam account game library.
Bundle
Pack X4
Standard Edition
Compare Choose & Buy Download (772)