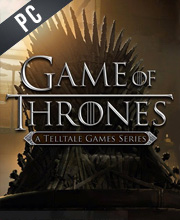 What is Game of Thrones A Telltale Games Series CD key?

It's a digital key that allows you to download Game of Thrones A Telltale Games Series directly to PC from the official Platforms.

How can I find the best prices for Game of Thrones A Telltale Games Series CD keys?

Allkeyshop.com compares the cheapest prices of Game of Thrones A Telltale Games Series on the digital downloads market to find the best sales and discount codes on trusted stores.

The story is based on the world-famous fantasy novels by George R. R. Martin and the HBO adaptation, Game of Thrones. The game follows an episodic format, which means the game will be released per episode, and player’s choices all throughout the game influences later events.

The family hails from Ironrath located in the north of Westeros. They control the Ironwood forest, a valuable forest that’s also being coveted by many due to its military importance. The family is caught up in the events surrounding the War of the Five Kings, and now they’re fighting to survive the chaos.

You will control one out of the 5 members of the family or servants of the Forresters. The decisions made by one character will affect others as well as the fate of the house. The characters include Lord Gregor Forrester (the head of House Forrester), Lady Elissa Forrester (the matriarch), and Rodrik Forrester (the first-born son) among others.

The episodes are as follows:

Zoom 1m 3m 1y All
Track product
PUBLISHER WEBSITE CD KEY: Use the CD Key Code to download directly on the Official Website or from the store to play Game of Thrones A Telltale Games Series. Follow the instructions given by the store. Verify languages available and possible region restrictions before buying.
STEAM GIFT : A Steam gift is a one-time transfer you receive. You activate and install Game of Thrones A Telltale Games Series to play on Steam, it is a non-refundable game that stays in your Steam games collection. Please read the store description about any language or region restrictions.
STEAM CD KEY : Use the Steam Key Code on Steam Platform to download and play Game of Thrones A Telltale Games Series. You must login to your Steam Account or create one for free. Download the (Steam Client HERE). Then once you login, click Add a Game (located in the bottom Left corner) -> Activate a Product on Steam. There type in your CD Key and the game will be activated and added to your Steam account game library.
Standard Edition
Compare Choose & Buy Download (791)

all fans of the t.v series will enjoy this game

the game is very good..just as good as the original t.v series

Telltale is the best developing team in the word much love…