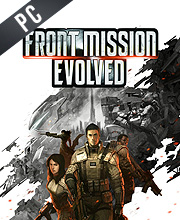 It's a digital key that allows you to download Front Mission Evolved directly to PC from the official Platforms.

How can I find the best prices for Front Mission Evolved CD keys?

Allkeyshop.com compares the cheapest prices of Front Mission Evolved on the digital downloads market to find the best sales and discount codes on trusted stores.

Front Mission Evolved is a third-person shooter video game developed by Double Helix Games and published by Square Enix. It is a reset of the Front Mission series, which takes place after the storyline of the earlier games.

The world has changed a lot. Humanity has started a colossal push into space by constructing orbital elevators to build surveillance satellites to watch over their enemies. The game is set around the world and in outer space in 2171 where a new war threatens to arise between the O.C.U. and the U.C.S after a U.C.S. orbital elevator is sabotaged by unknown forces.

Wherever humanity goes, destruction, conspiracies and war are sure to follow. Front Mission Evolved delivers an action-packed third-person shooter sim that gives players full control of a massive and impressive humanoid war machine called the “wanzer” for an overwhelming gaming experience. Use tactics in combat situations in an immersive world of futuristic technology.

Zoom 1m 3m 1y All
Track product
STEAM CD KEY : Use the Steam Key Code on Steam Platform to download and play Front Mission Evolved. You must login to your Steam Account or create one for free. Download the (Steam Client HERE). Then once you login, click Add a Game (located in the bottom Left corner) -> Activate a Product on Steam. There type in your CD Key and the game will be activated and added to your Steam account game library.
Standard Edition
Compare Choose & Buy Download (772)