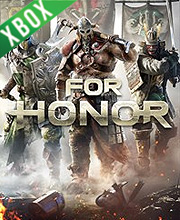 For Honor Xbox One Prices Digital or Physical Edition

What is For Honor Game Code?

It's a digital key that allows you to download For Honor directly to Xbox One from Xbox Live.

How can I find the best prices for For Honor on Xbox one?

Allkeyshop.com compares the cheapest prices of For Honor on the digital downloads market to find the best sales and discount codes on trusted stores.

Become a brave Knight, a vicious Viking, or a lethal Samurai to enter the mayhem of combat. On brand-new dedicated servers, you may now play the gripping story campaign or engage in vicious PvP battles.

For Honor is a game that I am not even close to finishing with. Its campaign is big enough to not feel tacked on, but the draw of the multiplayer action keeps dragging me away from finishing it. I can feel my skills improving after every round because it’s a new way to play against other players and that deserves highlighting in a highly saturated section of the market.

For Honor is great fun, but like any fighting game, it’ll only reach its true potential if players stick around for the long haul. It takes time for experts to develop high-level strategies, and for that knowledge to trickle down to the rest of the community, and as such it’ll be a few months before it’s clear whether or not the game can stand among the current titans of the genre.

The Complete Edition contains the base game and the following:

Expand your world with 4 new Heroes instantly and get the following features:

This Battle Bundle includes the following rewards for all 30 heroes:

this game has powerful graphic that i would buy the game for it !!

for honor is the best gaaame for real nattle amd great price tho !!

I like the story, is not the best story but is ok and for me is funny!

its the best racing game i have ever seen!
great job!