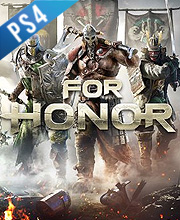 What is For Honor Game Code?

It's a digital key that allows you to download For Honor directly to Playstation 4 from PSN (Playstation network).

Allkeyshop.com compares the cheapest prices of For Honor on the digital downloads market to find the best sales and discount codes on trusted stores.

Become a brave Knight, a vicious Viking, or a lethal Samurai to enter the mayhem of combat. On brand-new dedicated servers, you may now play the gripping story campaign or engage in vicious PvP battles.

Ultimately, the real question of For Honor is if it will maintain a good community. The skill at the combat isn’t twitch based, but that doesn’t mean it’s easy and I could see people start to get scared away as the player base becomes more experienced and hardcore.

For Honor takes a somewhat ridiculous concept, lays down a pretty great fighting foundation on top of it and loads it with plenty of reasons to keep playing. This past year, Ubisoft has shown a penchant for developing exciting multiplayer experiences. For Honor might frustrate in a few areas, but for every one thing it does wrong, it does a dozen other things right. For Honor sets a strong pace for Ubisoft, and it looks like the developer on course for another great year of multiplayer action.

The Bundle Edition contains the base game and Tom Clancy’s Ghost Recon: Wildlands

The Gold Edition includes the base game and the following:

Expand your world with 4 new Heroes instantly and get the following features:

This Battle Bundle includes the following rewards for all 30 heroes:

I will only be interested, if it is entirely skill based. Can I kill 3 opponents of competent skill by myself based entirely upon my own skill?﻿