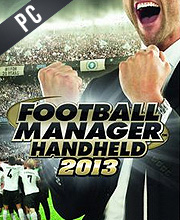 What is Football Manager 2013 CD key?

It's a digital key that allows you to download Football Manager 2013 directly to PC from the official Platforms.

How can I find the best prices for Football Manager 2013 CD keys?

Allkeyshop.com compares the cheapest prices of Football Manager 2013 on the digital downloads market to find the best sales and discount codes on trusted stores.

This is the most realistic football management game that you can get your hands on. This version lets you take control of any club in over 50 nations across the world. Be able to pull up 500,000 real-world players and staff the the games database.

Your role will be managing the team. That means you will be deciding who plays or who sits out the game. As manager you will also give team-talks, think of tactics which you can still change as you give instructions while following the match.

Get your hands on the new features of the Career Mode. With its newly improved Match Engine, you will enjoy great movements as well as graphics. Manager roles are also revamped, you will find the new restructure very friendly and more specialists are added to make everything a bit more easy. Training will also be different with its more simplified approach.

There is so much more to discover in the game that will keep you glued to your seat! Play Football Manager 2013, this will be definitely worth your time.

STEAM CD KEY : Use the Steam Key Code on Steam Platform to download and play Football Manager 2013. You must login to your Steam Account or create one for free. Download the (Steam Client HERE). Then once you login, click Add a Game (located in the bottom Left corner) -> Activate a Product on Steam. There type in your CD Key and the game will be activated and added to your Steam account game library.
Standard Edition. Read the store description to know the content.

Be the first one to write a review about Football Manager 2013 !