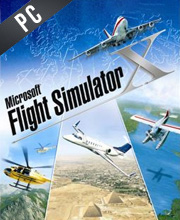 It's a digital key that allows you to download Flight Simulator X directly to PC from the official Platforms.

How can I find the best prices for Flight Simulator X CD keys?

Allkeyshop.com compares the cheapest prices of Flight Simulator X on the digital downloads market to find the best sales and discount codes on trusted stores.

It features more than 80 missions to test your prowess to earn rewards. Try your hand at Search and Rescue, Test Pilot, Carrier Operations, and more. Observe what you have done on each mission and improve your skill levels until you’re ready for the next challenge.

Flight Simulator X had been marketed by Microsoft as the most technological advancement the Flight Simulator series had ever seen. This game is the best among the early flight simulator games due to its improved graphics, improved airport traffic, air control, new aircrafts, and a lot of new improvements they added on top of its simple platform.

They included a new set of AI-controlled jetways, fuel trucks and moving baggage carts, to bring extra realism to the experience of flying at busy airports. It is the most Realistic Airport Simulation ever and is your best bet if you want to fly towards greater heights.

PUBLISHER WEBSITE CD KEY: Use the CD Key Code to download directly on the Official Website or from the store to play Flight Simulator X. Follow the instructions given by the store. Verify languages available and possible region restrictions before buying.
EU STEAM CD KEY: Requires an EUROPEAN IP address or you must activate it with a VPN (Virtual Private Network) in order to play Flight Simulator X. Might have languages restrictions or language packs. Read the description on the store game page to know if the EU IP is only needed for activation or for playing also (maybe on EU Servers). Most of the stores offer you their help, or show you how to do this with a tutorial to follow.
EUROPEAN STEAM GIFT : It’s a steam gift for Europe which requires an European IP address to activate and to play Flight Simulator X on Steam. Read carefully the store description about region and language restrictions.
STEAM GIFT : A Steam gift is a one-time transfer you receive. You activate and install Flight Simulator X to play on Steam, it is a non-refundable game that stays in your Steam games collection. Please read the store description about any language or region restrictions.
STEAM CD KEY : Use the Steam Key Code on Steam Platform to download and play Flight Simulator X. You must login to your Steam Account or create one for free. Download the (Steam Client HERE). Then once you login, click Add a Game (located in the bottom Left corner) -> Activate a Product on Steam. There type in your CD Key and the game will be activated and added to your Steam account game library.
Premium Edition
Special Edition
Standard Edition
Compare Choose & Buy Download (743)