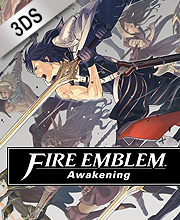 It's a digital key that allows you to download Fire Emblem Awakening directly to Nintendo 3DS directly from Nintendo eShop.

How can I find the best prices for Fire Emblem Awakening on Nintendo 3DS ?

Allkeyshop.com compares the cheapest prices of Fire Emblem Awakening on the digital downloads market to find the best sales and discount codes on trusted stores.

The content is huge since the single player campaign alone has no less than 25 chapters and more with all the side missions to complete. The possible changes add to the difficulty level and offers even more latitude to the life of the game that is close to perfection.

The artistic direction has provided an outstanding job and the game’s graphics are just beautiful. The level of detail culminated in Fire Emblem Awakening. The stereoscopic 3D brings immense depth to the visuals and the game environment.

The object of the game varies the challenges you set for yourself early in the game and also fighting the same time. You can customize the battle scenes endlessly to never become redundant.

Multiplayer offers exceptional capabilities since the additional players will have a true supporting role to play. Here is a game that has the potential to become a cult classic as the realization is perfect and well written story.

One of the better Fire Emblem Games 🙂 try it out it wont dissapoint you!

really great game, I remember playing it on Gameboy , worth buying