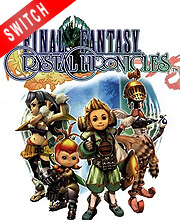 FINAL FANTASY CRYSTAL CHRONICLES is an action–role-playing game developed by The Game Designers Studio and published by Nintendo for the Nintendo Switch.

The story is of a young group called Crystal Caravans who venture on a remarkable journey in search of a rare liquid known as myrrh. This rare substance is well sought after for its capacity to cleanse and maintain a crystal that protects the word from miasma. The miasma is a gas composed of lethal properties and therefore hazardous to anyone who ingests it.

You may merge forces with you friends in the online multiplayer mode for up to four players. As one, harmoniously launch attacks on your despicable enemies so they may feel the wrath of your crystal caravan. Retirieve the myrrh and save your world from the looming miasma.

Region
US Box Edition : US BOX GAME : This is an US import of FINAL FANTASY CRYSTAL CHRONICLES Nintendo Switch in Box Edition (DVD-CD ROM). This is not a downloadable product. Please read the sellers page for any additional costs (taxes, shipping), delivery time for your country and languages available.