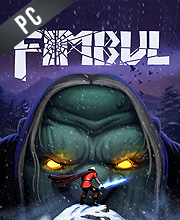 What is Fimbul CD key?

It's a digital key that allows you to download Fimbul directly to PC from the official Platforms.

How can I find the best prices for Fimbul CD keys?

Allkeyshop.com compares the cheapest prices of Fimbul on the digital downloads market to find the best sales and discount codes on trusted stores.

Fimbul is an action adventure game published by Wild River Games and developed by Zaxis for PC.

Prepare to indulge in intense Viking battles while witnessing a captivating story unfolds through in-game comics and brings life to the frozen world of the Norse sagas.

Become immersed in the blistering winter before Ragnarok, The Fimbul Winter.

The game has a unique feature called the time-line-tree that can be used at any point to explore the fate altering choices you made. Navigate your choices, venture to any intersection, and follow a different path through your story.

The game has a weapon-based combat system with a very low skill floor and a moderate skill cap.

It is an easy to learn yet complex system that players must learn if they are to be triumphant in their battle against enemy vikings. You can recruit aid from fellow Vikings to help you defeat towering trolls.

You ca employ items from the distant past to grow and battle a mighty race of giants named Jutons. These giants are older than the gods themselves.

EU STEAM CD KEY: Requires an EUROPEAN IP address or you must activate it with a VPN (Virtual Private Network) in order to play Fimbul. Might have languages restrictions or language packs. Read the description on the store game page to know if the EU IP is only needed for activation or for playing also (maybe on EU Servers). Most of the stores offer you their help, or show you how to do this with a tutorial to follow.
STEAM CD KEY : Use the Steam Key Code on Steam Platform to download and play Fimbul. You must login to your Steam Account or create one for free. Download the (Steam Client HERE). Then once you login, click Add a Game (located in the bottom Left corner) -> Activate a Product on Steam. There type in your CD Key and the game will be activated and added to your Steam account game library.
Standard Edition

Fimbul looks like an interesting action adventure game, I like the art and the graphics of the game and the use of comic book style to tell the story, it’s interesting enough to give it it a try.