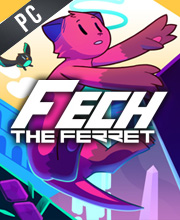 What is Fech The Ferret CD key?

It's a digital key that allows you to download Fech The Ferret directly to PC from the official Platforms.

How can I find the best prices for Fech The Ferret CD keys?

Allkeyshop.com compares the cheapest prices of Fech The Ferret on the digital downloads market to find the best sales and discount codes on trusted stores.

Fast and loud parkour platformer Fech The Ferret features music that improves as you move forward at a greater speed. You get to guide Fech, the pink ferret who is the star of this game, on his first journey through the Marmocle region. Discover what’s causing the mishaps in Marmocle by running through an open world and encountering some odd animals.

Zoom 1m 3m 1y All
Track product
STEAM CD KEY : Use the Steam Key Code on Steam Platform to download and play Fech The Ferret. You must login to your Steam Account or create one for free. Download the (Steam Client HERE). Then once you login, click Add a Game (located in the bottom Left corner) -> Activate a Product on Steam. There type in your CD Key and the game will be activated and added to your Steam account game library.
Standard Edition
Compare Choose & Buy Download (772)