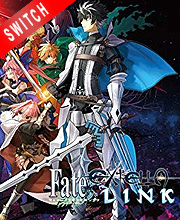 It's a digital key that allows you to download Fate Extella Link directly to Nintendo Switch directly from Nintendo eShop.

How can I find the best prices for Fate Extella Link on Nintendo Switch ?

Allkeyshop.com compares the cheapest prices of Fate Extella Link on the digital downloads market to find the best sales and discount codes on trusted stores.

Fate Extella Link is an action game developed by Marvelous and published by Xseed Games for the Nintendo Switch.

The game is set in the time of the Holy Grail War.

Nero and her master are victors of said war and now controls the Moon Cell Automaton computer.

The computer is equipped with the power to grant any wish

The duo has claimed the Regalia ring as proof of their kingship and now use it to preside over the former enemy servants.

They are now confronted by a powerful new enemy who wields power like that which resides within their Regalia.

Combat and vanquish all foes to ensure that the power ends up on the right side of history.

The fate of the world is in your hands.

BOX GAME : This is Fate Extella Link Nintendo Switch Box Edition (DVD-CD ROM). This is not a downloadable product. Please read the sellers page for any additional costs (taxes, shipping), delivery time for your country and languages available.
NINTENDO CODE : This is a digital code for Fate Extella Link Nintendo Switch. Use the download code on the Nintendo eShop of your Console. Once connected to the Nintendo eShop, you can enter and redeem the Download Code. Read carefully the store description about any language and region restrictions.
Standard Edition. Read the store description to know the content.

Be the first one to write a review about Fate Extella Link !