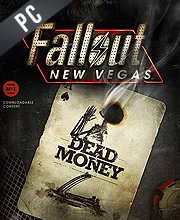 It's a digital key that allows you to download Fallout New Vegas Dead Money directly to PC from the official Platforms.

How can I find the best prices for Fallout New Vegas Dead Money CD keys?

Fallout: New Vegas is based in a post-apocalyptic, action, RPG open world environment around the area of Nevada, California, and Arizona. The player takes control of the character known as the Courier, who is hired by a delivery service to take an unknown package across the Mojave Desert to the New Vegas Strip.

During the delivery, the Courier is intercepted, shot in the head, and left for dead by a mysterious man who steals the package. After being found by a friendly robot, Victor, and healed by a man named Doc Mitchell, the Courier is thrust back into the desert to seek revenge and recover the stolen package. By doing this, the player becomes caught between various factions competing for control over the desert and its most valuable asset, the Hoover Dam, ultimately coming to shape the future of its inhabitants.

Dead Money DLC: In Dead Money, the Courier is captured by an insane ex-Brotherhood of Steel leader known as Father Elijah and must work alongside three other captives to find the fabled treasure of the Sierra Madre Casino, concealed from the world by a deadly toxic cloud.

The pack adds new achievements/trophies, new weapons, perks, terrain, enemies and decisions for the player, as well as raising the level cap by five. It is the only one of the four story add-ons that cannot be revisited after the completion of its main questline.

PUBLISHER WEBSITE CD KEY: Use the CD Key Code to download directly on the Official Website or from the store to play Fallout New Vegas Dead Money. Follow the instructions given by the store. Verify languages available and possible region restrictions before buying.
EU STEAM CD KEY: Requires an EUROPEAN IP address or you must activate it with a VPN (Virtual Private Network) in order to play Fallout New Vegas Dead Money. Might have languages restrictions or language packs. Read the description on the store game page to know if the EU IP is only needed for activation or for playing also (maybe on EU Servers). Most of the stores offer you their help, or show you how to do this with a tutorial to follow.
STEAM GIFT : A Steam gift is a one-time transfer you receive. You activate and install Fallout New Vegas Dead Money to play on Steam, it is a non-refundable game that stays in your Steam games collection. Please read the store description about any language or region restrictions.
STEAM CD KEY : Use the Steam Key Code on Steam Platform to download and play Fallout New Vegas Dead Money. You must login to your Steam Account or create one for free. Download the (Steam Client HERE). Then once you login, click Add a Game (located in the bottom Left corner) -> Activate a Product on Steam. There type in your CD Key and the game will be activated and added to your Steam account game library.
DLC
DLC Pack
Ultimate Edition