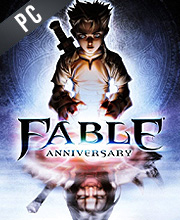 What is Fable Anniversary CD key?

It's a digital key that allows you to download Fable Anniversary directly to PC from the official Platforms.

How can I find the best prices for Fable Anniversary CD keys?

Allkeyshop.com compares the cheapest prices of Fable Anniversary on the digital downloads market to find the best sales and discount codes on trusted stores.

Fable is back and introduces a revamped, reworked version that’s surely going to take your breath away.

Fable Anniversary features overhauled graphics, a new save system and incorporates Achievements. Like the original Fable game, Fable Anniversary is also played by improving your character’s statistics, skills and equipment. Earn experience by completing quests and missions and gain items from boss fights and quests as well. With its wide variety of weapons, you can choose what fighting style would best suit your gameplay.

With its overhauled graphics, you can notice a lot of improvements like better animations and expressive lip synching. The world of Albion has inspired gamers to fall in love with the franchise for nearly a decade and counting. Updated to HD to unlock the power of new consoles, Fable Anniversary is a major visual leap over the original. Vivid graphics and remastered audio result in a stunning re-imagination of Fable that will impress fans old and new.

Zoom 1m 3m 1y All
Track product
EU STEAM CD KEY: Requires an EUROPEAN IP address or you must activate it with a VPN (Virtual Private Network) in order to play Fable Anniversary. Might have languages restrictions or language packs. Read the description on the store game page to know if the EU IP is only needed for activation or for playing also (maybe on EU Servers). Most of the stores offer you their help, or show you how to do this with a tutorial to follow.
EUROPEAN STEAM GIFT : It’s a steam gift for Europe which requires an European IP address to activate and to play Fable Anniversary on Steam. Read carefully the store description about region and language restrictions.
STEAM GIFT : A Steam gift is a one-time transfer you receive. You activate and install Fable Anniversary to play on Steam, it is a non-refundable game that stays in your Steam games collection. Please read the store description about any language or region restrictions.
STEAM CD KEY : Use the Steam Key Code on Steam Platform to download and play Fable Anniversary. You must login to your Steam Account or create one for free. Download the (Steam Client HERE). Then once you login, click Add a Game (located in the bottom Left corner) -> Activate a Product on Steam. There type in your CD Key and the game will be activated and added to your Steam account game library.
Bonus Edition
Standard Edition
Compare Choose & Buy Download (743)

Awesome game. This remastered version of the original game is really nice. Grab it on GreenGaming store.

I have played the fable: the lost chapters and it was real fun, and seeing this definitely makes me want to replay it.

Just seeing you play this game makes me happy. good commentary and also you earned yourself a new sub﻿