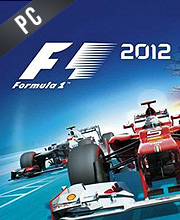 It's a digital key that allows you to download F1 2012 directly to PC from the official Platforms.

Allkeyshop.com compares the cheapest prices of F1 2012 on the digital downloads market to find the best sales and discount codes on trusted stores.

F1 2012 spotlights all of the official teams, drivers and circuits from the 2012 FIA Formula One World Championship. A whole new next level entertaining F1 game, that brings you the intensity of an F1 race and the graphics to back it up. Well built, works nicely without FPS drops. All the circuits and cars are in and quite accurately modeled. Champions mode adds some trials which makes the game not just like any simple races but will surely give you an extreme racing experience.

Overall, F1 2012 is the best Formula One racing game on the market, and it’s not because there are no other titles. Throughout the evolution F1 2012 is one step closer to the racing game perfection.

Zoom 1m 3m 1y All
Track product
EU STEAM CD KEY: Requires an EUROPEAN IP address or you must activate it with a VPN (Virtual Private Network) in order to play F1 2012. Might have languages restrictions or language packs. Read the description on the store game page to know if the EU IP is only needed for activation or for playing also (maybe on EU Servers). Most of the stores offer you their help, or show you how to do this with a tutorial to follow.
STEAM GIFT : A Steam gift is a one-time transfer you receive. You activate and install F1 2012 to play on Steam, it is a non-refundable game that stays in your Steam games collection. Please read the store description about any language or region restrictions.
STEAM CD KEY : Use the Steam Key Code on Steam Platform to download and play F1 2012. You must login to your Steam Account or create one for free. Download the (Steam Client HERE). Then once you login, click Add a Game (located in the bottom Left corner) -> Activate a Product on Steam. There type in your CD Key and the game will be activated and added to your Steam account game library.
STEAM KEY ROW : It means for Rest Of the World countries which are not concerned by the region restrictions. This product can't be purchased and activated in Several countries. Please read the store description to know the full list of countries which are concerned. Use the key to Download and play F1 2012 on Steam.
Standard Edition
Compare Choose & Buy Download (803)

Good game on multiplayer, Single player career is too short plus the penalty system on this game is very random and poor. Champions mode and season challenge is quite good.