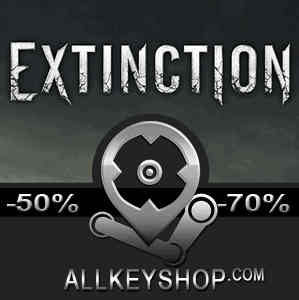 What is Extinction CD key?

It's a digital key that allows you to download Extinction directly to PC from the official Platforms.

How can I find the best prices for Extinction CD keys?

Allkeyshop.com compares the cheapest prices of Extinction on the digital downloads market to find the best sales and discount codes on trusted stores.

Extinction is an action game developed by Iron Galaxy Studios and published by Maximum Games, that speaks about an era in which the true enemies of the humankind showed themselves, making the people forget about their “civil wars” for land and riches.

The only warriors that can face these monsters, colloquially known as ogres, are the ones trained in the ways of the ancient order. But the player takes the role of Avil, the only warrior of this kind, prepared with the skill, speed and strenght he needs to defend the humanity from a destiny of extinction.

Remember the only purpose you have: to save the humanity, and focus on the realtime combat, use your surroundings to escape, find the monster’s weak points, battle and win the war against the Ravenii, in the new Extinction game.

STEAM CD KEY : Use the Steam Key Code on Steam Platform to download and play Extinction. You must login to your Steam Account or create one for free. Download the (Steam Client HERE). Then once you login, click Add a Game (located in the bottom Left corner) -> Activate a Product on Steam. There type in your CD Key and the game will be activated and added to your Steam account game library.
EU STEAM CD KEY: Requires an EUROPEAN IP address or you must activate it with a VPN (Virtual Private Network) in order to play Extinction. Might have languages restrictions or language packs. Read the description on the store game page to know if the EU IP is only needed for activation or for playing also (maybe on EU Servers). Most of the stores offer you their help, or show you how to do this with a tutorial to follow.
Standard Edition. Read the store description to know the content.
Deluxe Edition. Read the store description to know the content.

Be the first one to write a review about Extinction !

Definately best place to buy this game. For such a new game best offer is 50% cheaper then Steam. It’s great!

HRK has an excellent deal for Extinction which looks to be a solid single-player hack’n’slash game featuring deep story telling and dynamic side quest system.

HRK Game is currently the cheapest place to get this key!