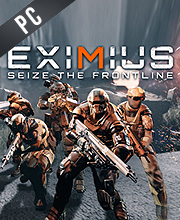 You can participate to these tests by adding comments about your digital download purchase in the store review page. Enjoy the best deals for Eximius Seize the Frontline CD Key with Allkeyshop.com!

Eximus: Seize The Frontline is an action, strategy video game that is developed by Ammobox Studios and published by TheGameWall Studios.

Offering a hybrid of FPS and RTS, Eximus is a strategic action shooter that focuses on squad-based combat. There will be both tactical first-person shooter gameplay as well as strategic decision making for real-time strategy. Get to fight in a post-apocalyptic urban environment in 5v5 competitive team battles.

If you play as a Commander, you will build bases, train your army and call for support abilities. Play as an officer and you will be the one who will lead the infantry squad into combat. You will also gather resources and equip weapons for your team.

Your objective is to hold down that most victory points in order to win. Another way to win is if your forces are very powerful, you can crush your enemy’s base and can win immediately.

There will be two factions to choose from which are the Axeton Corporation and the Global Security Force.

The game features a seamless transition from its RTS interface to being able to play in the frontline. Building bases are also available having resource and technology trees. Here you can train infantry units and assign them to players.

Get to unlock technologies and construct new powerful units like elite soldiers, armored vehicles and airships.

And of course, the battlesuits! These suits increase your status. There are a number of battlesuits to choose from as well, with different abilities and play styles.

STEAM CD KEY : Use the Steam Key Code on Steam Platform to download and play Eximius Seize the Frontline. You must login to your Steam Account or create one for free. Download the (Steam Client HERE). Then once you login, click Add a Game (located in the bottom Left corner) -> Activate a Product on Steam. There type in your CD Key and the game will be activated and added to your Steam account game library.
STEAM GIFT : A Steam gift is a one-time transfer you receive. You activate and install Eximius Seize the Frontline to play on Steam, it is a non-refundable game that stays in your Steam games collection. Please read the store description about any language or region restrictions.
Early Access CD Key. Play before the release date.

Be the first one to write a review about Eximius Seize the Frontline !

Looks like a promising game, definitely worthy trying, especially with these prices.

it’s look interesting game, maybe i would try it!! i really like the graphics of the game.