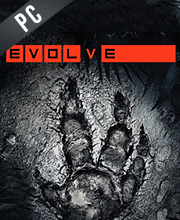 What is Evolve CD key?

It's a digital key that allows you to download Evolve directly to PC from the official Platforms.

How can I find the best prices for Evolve CD keys?

Allkeyshop.com compares the cheapest prices of Evolve on the digital downloads market to find the best sales and discount codes on trusted stores.

Evolve’s combat and cooperative play immediately evokes thoughts of Turtle Rock’s Left4Dead but the asymmetrical multiplayer along with the atmosphere of the game separate the two titles.

It’s rare for a big multiplayer game like Evolve to feel so considered and intelligent. Everything – skills, mechanics, and design choices – seem to interlock in a way that’s both natural and purposeful. That it’s so mechanically rich and still conveys the raw energy and fun of duking it out with huge monsters and action-figure-esque hunters is a real design feat. Its progression system stifles it a bit early on, but regardless, Evolve is a deeply rewarding multiplayer experience that packs both brains and brawn.

A refreshingly asymmetrical FPS with terrific competitive depth, but the thrill of the hunt eventually begins to wane.

If you’re looking for something different from your run-of the mill shooters, Evolve is probably just what you are looking for.

The Evolve Medic Savior Skin Pack includes a new pack of weapon skins for each of the Medic characters: Val, Lazarus, and Caira.

Find all the best prices for EVOLVE DLCs on Allkeyshop!

Zoom 1m 3m 1y All
Track product
EU STEAM CD KEY: Requires an EUROPEAN IP address or you must activate it with a VPN (Virtual Private Network) in order to play Evolve. Might have languages restrictions or language packs. Read the description on the store game page to know if the EU IP is only needed for activation or for playing also (maybe on EU Servers). Most of the stores offer you their help, or show you how to do this with a tutorial to follow.
STEAM CD KEY : Use the Steam Key Code on Steam Platform to download and play Evolve. You must login to your Steam Account or create one for free. Download the (Steam Client HERE). Then once you login, click Add a Game (located in the bottom Left corner) -> Activate a Product on Steam. There type in your CD Key and the game will be activated and added to your Steam account game library.
XBOX ONE GAME CODE : Use the Digital Code received by mail in your Xbox One account to download Evolve from the Xbox Live. Internet connection is required. Please read the store description about any language or region restrictions.
Bonus Edition
Dayone Edition
Deluxe Edition
Monster Edition
Standard Edition
Compare Choose & Buy Download (772)

Great action game surely woth a try at this price.

Good game, not bugged.. need more player, is free with 99 cent you can have some good stuff

this game is truly awesome.
Recommended!
Instant gaming has the best price 🙂

A pretty nice game by the developers of Left 4 Dead. I recommend it to everyone to at least try it.