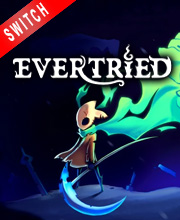 What is Evertried Game Code?

It's a digital key that allows you to download Evertried directly to Nintendo Switch directly from Nintendo eShop.

How can I find the best prices for Evertried on Nintendo Switch ?

Allkeyshop.com compares the cheapest prices of Evertried on the digital downloads market to find the best sales and discount codes on trusted stores.

Evertried is an isometric strategy rogue-lite game with rhythm-based mechanics developed by Lunic Games and Danilo Domingues. Your goal is to ascend to the top of a mysterious tower in Limbo to prove yourself worthy of the afterlife, floor by floor. But in order to proceed with each level, you must first defeat all enemies on the floor using your wits along with the game’s position-based combat, you can only move one tile at a time and the enemy only moves after you, allowing you to dodge the enemies’ choreographed attacks. Learn to think ahead, develop intricate strategies, outmaneuver your opponent, in your path to ascension.

Despite its difficulty, Evertried is almost faultless in what it attempts to achieve. The gameplay is tight, the music and visuals are both fresh and nostalgic, and the roguelike tower aspect and difficulty will have you coming back for “just one more run” until you ascend to the top.

If you love Into the Breach, you’ll want to give this a look. It has a similar vibe, and even if it doesn’t hold up in the long term quite as well, you’ll still get plenty of fun out of it.

Zoom 1m 3m 1y All
Track product
NINTENDO CODE : This is a digital code for Evertried. Use the download code on the Nintendo eShop of your Console. Once connected to the Nintendo eShop, you can enter and redeem the Download Code. Read carefully the store description about any language and region restrictions.
Standard Edition
Compare Choose & Buy Download (772)