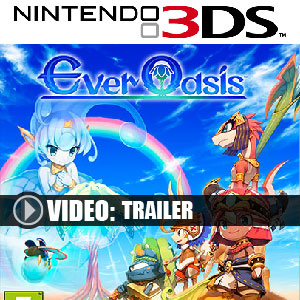 What is Ever Oasis CD key?

It's a digital key that allows you to download Ever Oasis directly to PC from the official Platforms.

How can I find the best prices for Ever Oasis CD keys?

Allkeyshop.com compares the cheapest prices of Ever Oasis on the digital downloads market to find the best sales and discount codes on trusted stores.

Ever Oasis is an action–adventure role-playing video game developed by Grezzo and published by Nintendo.

Ever Oasis tells the story of Tethu/Tethi who with the help of a water spirit named Esna creates an oasis after Tethu/Tethi’s brother Nour gets kidnapped and his oasis falls to Chaos, a thread that transforms its inhabitants into monsters and ruins the tranquil mood.

As you journey to find more residents you have to fight the creatures that have been taken over by Chaos. On your adventure you discover many villages belonging to other races. You must work together with new allies to create the perfect Oasis as Tethu/Tethi continues to unrevel the mystery of what happened to his/her brother.

Players complete missions, trying to build a prosperous oasis. They can also form a party of up to 3 characters and battle enemies possessed by Chaos. In combat they have the ability to switch between three party members.

You can get help from members of other tribes along the journey by joining on missions and also exploring for materials.

There’s so much to do it can feel a little overwhelming in the beginning but the game does a great job guiding you through.

Zoom 1m 3m 1y All
Track product
NINTENDO CODE : This is a digital code for Ever Oasis. Use the download code on the Nintendo eShop of your Console. Once connected to the Nintendo eShop, you can enter and redeem the Download Code. Read carefully the store description about any language and region restrictions.
Standard Edition
Compare Choose & Buy Download (759)