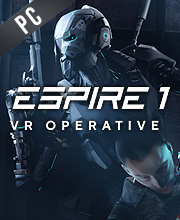 It's a digital key that allows you to download Espire 1 VR Operative directly to PC from the official Platforms.

How can I find the best prices for Espire 1 VR Operative CD keys?

Allkeyshop.com compares the cheapest prices of Espire 1 VR Operative on the digital downloads market to find the best sales and discount codes on trusted stores.

Play as an Espire Agent using the cutting edge virtual Virtual Reality hardware that is able to remotely operate the Espire model 1. You won’t be in harm’s way as you are able to control the drones in a special ” Control Theater”. The Espire 1 will let players have the freedom of movement within their virtual environment. This can all be done in full comfort without motion sickness. Offering a four to six hour story campaign that includes 25 virtual challenges that will give players the chance to test the core stealth mechanics of the game as well as compete on the global leaderboards.

This is one super-spy hero game that is unlike any other. With the current VR technology, the head and hard-tracked capabilities are much more refined making the game’s Stealth mechanics unique and cannot be copied by any other medium.

Get to live out your fantasies of being a 007 agent as an Espire Model 1 Operative in Espire 1: VR Operative.

EU STEAM CD KEY: Requires an EUROPEAN IP address or you must activate it with a VPN (Virtual Private Network) in order to play Espire 1 VR Operative. Might have languages restrictions or language packs. Read the description on the store game page to know if the EU IP is only needed for activation or for playing also (maybe on EU Servers). Most of the stores offer you their help, or show you how to do this with a tutorial to follow.
STEAM CD KEY : Use the Steam Key Code on Steam Platform to download and play Espire 1 VR Operative. You must login to your Steam Account or create one for free. Download the (Steam Client HERE). Then once you login, click Add a Game (located in the bottom Left corner) -> Activate a Product on Steam. There type in your CD Key and the game will be activated and added to your Steam account game library.
STEAM KEY ROW : It means for Rest Of the World countries which are not concerned by the region restrictions. This product can't be purchased and activated in Several countries. Please read the store description to know the full list of countries which are concerned. Use the key to Download and play Espire 1 VR Operative on Steam.
Bundle
Preorder bonus
Standard Edition