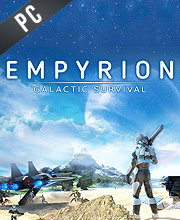 It's a digital key that allows you to download Empyrion Galactic Survival directly to PC from the official Platforms.

How can I find the best prices for Empyrion Galactic Survival CD keys?

Allkeyshop.com compares the cheapest prices of Empyrion Galactic Survival on the digital downloads market to find the best sales and discount codes on trusted stores.

This is a huge 3D open world sandbox game that will allow you to conquer planets, create spaceships and so much more. It is a combination of construction, simulation, survival and shooter games.

The game features a whole solar system that you can readily explore. It is a huge sandbox that allows you warp from planet to planet or even fly from a planet to its closest moon. You will also be able to land on the planets that are available in the solar system. And each planet will be different with its own distinct characteristics like gravity, number of moons, climate, vegetation, etc.

Empyrion – Galactic Survival will also test your survival skills, as you wouldn’t know what lurks in the shadows of an alien planet. To survive, you of course would need basic necessities. You must learn to hunt, farm and create your very own food system. You must also know how to build and construct a variety of things from small vessels to huge ships. Crafting is a really great skill to have in this kinds of situations.

A creative mode is available if you would just want to build without the hassle of surviving first. There is a Creative Community where you can share your best creations on the Steam Workshop.

You can either play the game by yourself or with some friends, either way go out and conquer the solar system.

EUROPEAN STEAM GIFT : It’s a steam gift for Europe which requires an European IP address to activate and to play Empyrion Galactic Survival on Steam. Read carefully the store description about region and language restrictions.
STEAM GIFT : A Steam gift is a one-time transfer you receive. You activate and install Empyrion Galactic Survival to play on Steam, it is a non-refundable game that stays in your Steam games collection. Please read the store description about any language or region restrictions.
STEAM CD KEY : Use the Steam Key Code on Steam Platform to download and play Empyrion Galactic Survival. You must login to your Steam Account or create one for free. Download the (Steam Client HERE). Then once you login, click Add a Game (located in the bottom Left corner) -> Activate a Product on Steam. There type in your CD Key and the game will be activated and added to your Steam account game library.
Early Access
Standard Edition

I have played this game Before it is awesome game