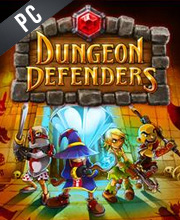 What is Dungeon Defenders CD key?

It's a digital key that allows you to download Dungeon Defenders directly to PC from the official Platforms.

How can I find the best prices for Dungeon Defenders CD keys?

Allkeyshop.com compares the cheapest prices of Dungeon Defenders on the digital downloads market to find the best sales and discount codes on trusted stores.

Dungeon Defenders is a multiplayer video game developed and published by Trendy Entertainment that combines the genres of tower defense, RPG, and high fantasy/action/adventure/strategy where one to four players work together to protect one or more Eternia Crystals from being destroyed by waves of enemies which include goblins, orcs, kobolds, ogres, and wyverns.

The game features a number of levels, consisting of around five total waves, through its campaign mode, or other levels as part of challenges; some of these levels may feature a final wave that includes a boss battle against a unique foe.

The player characters defend crystals by either magically creating, maintaining, and upgrading towers or other defensive elements that damage or divert the enemy monsters, or by using melee and ranged attacks to defeat enemies directly.

If an Eternia Crystal has taken too much damage, it will be destroyed and the players will lose that level. Successfully defending a wave will earn the characters experience points based on the difficulty plus additional bonuses, namely preventing any damage to the crystals, preventing damage to your character, and only using weapons to kill monsters; successfully completing all waves of a level will earn the players a large banked mana boost. Monsters will also drop items that can be sold for additional banked mana.

Zoom 1m 3m 1y All
Track product
EU STEAM CD KEY: Requires an EUROPEAN IP address or you must activate it with a VPN (Virtual Private Network) in order to play Dungeon Defenders . Might have languages restrictions or language packs. Read the description on the store game page to know if the EU IP is only needed for activation or for playing also (maybe on EU Servers). Most of the stores offer you their help, or show you how to do this with a tutorial to follow.
EUROPEAN STEAM GIFT : It’s a steam gift for Europe which requires an European IP address to activate and to play Dungeon Defenders on Steam. Read carefully the store description about region and language restrictions.
STEAM GIFT : A Steam gift is a one-time transfer you receive. You activate and install Dungeon Defenders to play on Steam, it is a non-refundable game that stays in your Steam games collection. Please read the store description about any language or region restrictions.
STEAM CD KEY : Use the Steam Key Code on Steam Platform to download and play Dungeon Defenders . You must login to your Steam Account or create one for free. Download the (Steam Client HERE). Then once you login, click Add a Game (located in the bottom Left corner) -> Activate a Product on Steam. There type in your CD Key and the game will be activated and added to your Steam account game library.
XBOX ONE GAME CODE : Use the Digital Code received by mail in your Xbox One account to download Dungeon Defenders from the Xbox Live. Internet connection is required. Please read the store description about any language or region restrictions.
Collection
Pack X4
Standard Edition
Ultimate Collection
Compare Choose & Buy Download (743)

I used to play this with my friends back in the days, and it was a blast