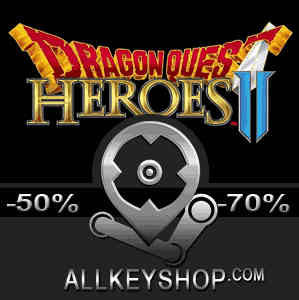 It's a digital key that allows you to download Dragon Quest Heroes 2 directly to PC from the official Platforms.

How can I find the best prices for Dragon Quest Heroes 2 CD keys?

Allkeyshop.com compares the cheapest prices of Dragon Quest Heroes 2 on the digital downloads market to find the best sales and discount codes on trusted stores.

It all starts in the once peaceful land of seven kingdoms. Everybody lived in harmony when suddenly the kingdoms wage war at each other as if they were enchanted by an ancient prophecy. Wanting to have peace brought back, the heroes from the different kingdoms band together to make sure this happens.

Players are able to move around a huge map and visit towns as well as encounter random enemies along the way. Special treasures are also available to be discovered in the map. There are also different weather occurrences in the game that can affect your party’s status. An example of this is when it rains, a curse ailment is inflicted on your party when in battle.

Classes are also assigned to your character which you can switch over and carry-over the class-specific equipment. The known classes include martial artist, mage, monk, thief, and warrior.

In order to progress through the game’s main story, players must go through and complete the Battle Stages.

Will you be able to restore peace to the Seven Kingdoms? Play Dragon Quest Heroes II and find out.

EU STEAM CD KEY: Requires an EUROPEAN IP address or you must activate it with a VPN (Virtual Private Network) in order to play Dragon Quest Heroes 2. Might have languages restrictions or language packs. Read the description on the store game page to know if the EU IP is only needed for activation or for playing also (maybe on EU Servers). Most of the stores offer you their help, or show you how to do this with a tutorial to follow.
STEAM CD KEY : Use the Steam Key Code on Steam Platform to download and play Dragon Quest Heroes 2. You must login to your Steam Account or create one for free. Download the (Steam Client HERE). Then once you login, click Add a Game (located in the bottom Left corner) -> Activate a Product on Steam. There type in your CD Key and the game will be activated and added to your Steam account game library.
STEAM KEY ROW : It means for Rest Of the World countries which are not concerned by the region restrictions. This product can't be purchased and activated in Several countries. Please read the store description to know the full list of countries which are concerned. Use the key to Download and play Dragon Quest Heroes 2 on Steam.
Bonus Edition
Explorer Edition
Standard Edition

The store that has the best price for Dragon Quest Heroes 2 CD Key is savemi uk.

G2 Play is the by far most reliable and cheapest place to get new titles.

Bought CS:GO over the site and got the key a few minutes later. 9/10

As a person who has never played DQH before i must say i really like the gameplay, and the story so far

G2Play is the best place where you can buy Dragon Quest heroes 2 ! i hope taxes for some countries will be lower with time….