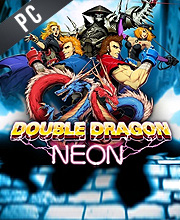 It's a digital key that allows you to download Double Dragon Neon directly to PC from the official Platforms.

How can I find the best prices for Double Dragon Neon CD keys?

Allkeyshop.com compares the cheapest prices of Double Dragon Neon on the digital downloads market to find the best sales and discount codes on trusted stores.

There are new moves in addition to the standard punch, kick, and jump buttons and a designated run button, the player now has an evade button for dodging attacks. If the player times their evasion right so as to perfectly dodge an enemy attack, they will “Gleam” by briefly glowing red, during that time their attacks will be more powerful.

The player can collect life-replenishing sodas, money to buy items from shops, and special mixtapes that can be equipped from a pause menu. Two different tapes can be equipped at once: one to grant the brothers a powerful attack that consumes a separate energy meter, and one to alter their statistics and grant special effects (such as making it easier to stun enemies or healing HP with every connecting blow).

By collecting multiple copies of a tape, its effect gradually increases until it reaches a maximum capacity. Each tape’s maximum capacity can be increased further by visiting a “Tapesmith” and paying him Mythril, which is obtained from defeated bosses.

In a two-player game, both Billy and Jimmy can utilize a special “high-five” technique to split and share their life meters to an equal amount, “psych” the other one out to harm them or make them fall over, or to instantly trigger a Gleam effect. If one player is defeated in battle, the other player has a limited time to revive him before a life is deducted (unless both players are defeated together). When one player is completely out of lives, he can steal one from the other player if he has at least two left.

Zoom 1m 3m 1y All
Track product
STEAM GIFT : A Steam gift is a one-time transfer you receive. You activate and install Double Dragon Neon to play on Steam, it is a non-refundable game that stays in your Steam games collection. Please read the store description about any language or region restrictions.
STEAM CD KEY : Use the Steam Key Code on Steam Platform to download and play Double Dragon Neon. You must login to your Steam Account or create one for free. Download the (Steam Client HERE). Then once you login, click Add a Game (located in the bottom Left corner) -> Activate a Product on Steam. There type in your CD Key and the game will be activated and added to your Steam account game library.
Standard Edition
Compare Choose & Buy Download (759)