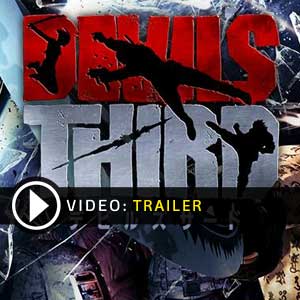 What is Devil's Third Game Code?

It's a digital key that allows you to download Devil's Third directly to Nintendo Wii U from Nintendo eShop.

How can I find the best prices for Devil's Third on Wii U ?

Allkeyshop.com compares the cheapest prices of Devil's Third on the digital downloads market to find the best sales and discount codes on trusted stores.

This game is played for the third person, Browsing the streets and perform increasingly bloody mission with an arsenal worthy of the greatest serial killers and larger armies.

Directly inspired Ninja Gaiden and Dead or Alive, this game will offer you an exciting adventure through a scenario full of surprises.

In more real than life scenery of a big city, so you will indulge in increasingly crazy stunts and killing without mercy to complete your missions and various quests that allow you to accumulate weapons and various objects.

The gameplay is very rich as you can for example take shots while sliding on the floor, shoot for in the first person, and you move in all sorts of unusual positions for this kind of play.

Once the single player campaign is complete, you can reach the crazy Multiplayer game and fight against followers worldwide.