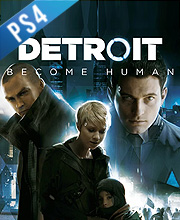 It's a digital key that allows you to download Detroit Become Human directly to Playstation 4 from PSN (Playstation network).

Allkeyshop.com compares the cheapest prices of Detroit Become Human on the digital downloads market to find the best sales and discount codes on trusted stores.

Detroit: Become Human is an adventure video game that is developed by Quantic Dream and published by SIEA for the PlayStation 4.

Set in the city of Detroit in the near future where a technological advancement has been made available: androids! Play as the android Kara who runs away from the factory that she was made in and explores the outside world. Players will also get the chance to control two other androids, Connor who hunts down androids that are deviant and Markus who actually sets androids free.

These characters may possibly die depending on your choices in the game however the story will still continue without them resulting in a different ending. A branching storyline is available and it can be reshaped with every single decision that you make in the game.

Gathering more information will actually give you a higher success rate for a better ending. Get more clues and rewind the story to a certain point and reshape your future.

Find out what it means to be human in the eyes of a machine in Detroit: Become Human.

Now is the chance to play this game, you just have to be a PS Plus member! Great story and excelent graphics!