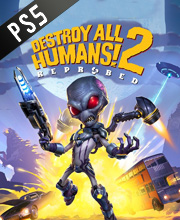 What is Destroy All Humans 2 Reprobed Game Code?

It's a digital key that allows you to download Destroy All Humans 2 Reprobed directly to Playstation 5 from PSN (PlayStation Network).

How can I find the best prices for Destroy All Humans 2 Reprobed on Playstation 5 ?

I highly recommend Destroy All Humans! 2 – Reprobed. While Reprobed left me feeling a bit empty because it is another exact one-to-one recreation, the new updates and additions as well as a beautifully recreated world gives me just enough trust that Black Forest Games is the team to resurrect the Furon Empire.

Destroy All Humans 2! – Reprobed is a chaos-induced joyride through various cities on Earth, using plenty of weapons to get the job done. Some of the humour feels outdated, but there’s no denying the fun to be had causing tons of destruction.

Destroy All Humans! 2: Reprobed remains a good example about how a remake should look and feel. Although part of the PS2 era, the game has aged well, and it remains largely entertaining. The new elements do not feel out of place, but they also do not overhaul the game experience. If you loved the original, the remaster will be a pleasant stroll down memory lane. If you are a newcomer, I recommend starting with the remaster of the first game to understand the story and fully appreciate the evolution of the gameplay.