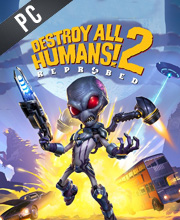 What is Destroy All Humans 2 Reprobed CD key?

It's a digital key that allows you to download Destroy All Humans 2 Reprobed directly to PC from the official Platforms.

How can I find the best prices for Destroy All Humans 2 Reprobed CD keys?

Destroy All Humans! 2 Reprobed is a stellar remake of a beloved classic. As you deal with the KGB, hippies, and strange humans alike, there’s nothing quite as entertaining as watching Crypto continue his crusade to destroy all humans and become ruler of Planet Earth. This will definitely hold you off while we wait for a true sequel to the series.

Silly fun that lives up to its premise and a ton of options come together to make this a remake that’s worth hopping back in the saucer for. It also doesn’t hurt that it’s gorgeous to look at.

Destroy All Humans! 2 – Reprobed enhances the look and gameplay of the 2006 classic, but it does not solve some of the game’s underlying issues. 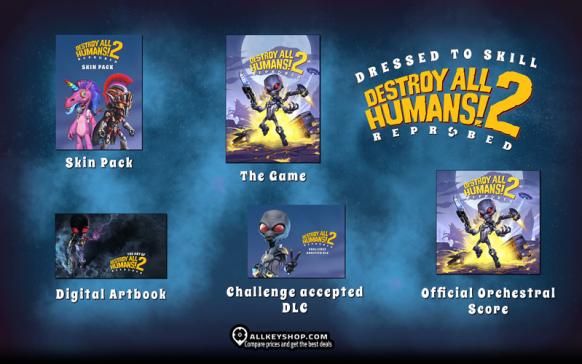 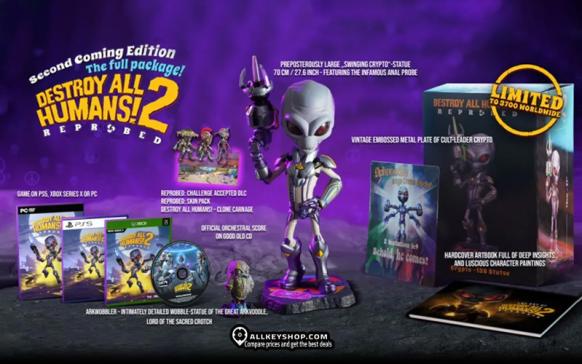 Don’t know which edition to choose? Here’s a guide to help you decide: Destroy All Humans! 2 – Reprobed: Which Edition to Choose?

Zoom 1m 3m 1y All
Track product
GOG.COM CD KEY : You need to register on Gog.com, then use the GOG Key to download and activate your game to play Destroy All Humans 2 Reprobed.
EU STEAM CD KEY: Requires an EUROPEAN IP address or you must activate it with a VPN (Virtual Private Network) in order to play Destroy All Humans 2 Reprobed. Might have languages restrictions or language packs. Read the description on the store game page to know if the EU IP is only needed for activation or for playing also (maybe on EU Servers). Most of the stores offer you their help, or show you how to do this with a tutorial to follow.
STEAM GIFT : A Steam gift is a one-time transfer you receive. You activate and install Destroy All Humans 2 Reprobed to play on Steam, it is a non-refundable game that stays in your Steam games collection. Please read the store description about any language or region restrictions.
STEAM CD KEY : Use the Steam Key Code on Steam Platform to download and play Destroy All Humans 2 Reprobed. You must login to your Steam Account or create one for free. Download the (Steam Client HERE). Then once you login, click Add a Game (located in the bottom Left corner) -> Activate a Product on Steam. There type in your CD Key and the game will be activated and added to your Steam account game library.
STEAM KEY ROW : It means for Rest Of the World countries which are not concerned by the region restrictions. This product can't be purchased and activated in Several countries. Please read the store description to know the full list of countries which are concerned. Use the key to Download and play Destroy All Humans 2 Reprobed on Steam.
Dressed to Skill Edition
Standard Edition
Compare Choose & Buy Download (772)

The first one was fun, felt like the whole game was a tutorial (literally beat the final boss thinking I was finally getting out of the tutorial) so fingers crossed this ones more difficult and less hand holdy. Please be some zim voice too! WhyGamingWhy#7113

Fantastic game, needs to be more games like it, instead of dead serious games.

Incredibile game, i had a lot of fun playing this amazing game with my friends.