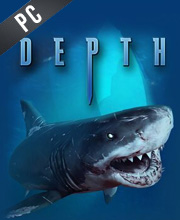 What is Depth CD key?

It's a digital key that allows you to download Depth directly to PC from the official Platforms.

How can I find the best prices for Depth CD keys?

Allkeyshop.com compares the cheapest prices of Depth on the digital downloads market to find the best sales and discount codes on trusted stores.

Depth is a Indie video game developed by Digital Confectioners. It is a asymmetrical multiplayer adventure game pitting a number of treasure hunting divers against sharks.

The game is a first-person shooter which takes place in underwater environments, the player can play as either a diver or a shark. Divers purchase weapons based on both collected treasure and kills. Sharks gain new abilities by eating the opposing team. Each team has a limited number of respawns, the first to run out is the loser.

Depth began production in 2009, as a student project built as a mod for Unreal Tournament 3 by a small team led by Alex Quick of Killing Floor fame. Between 2010 and 2012 the game was ported to UDK and became a standalone game. However development eventually stalled due to game play concerns by the production team. In 2013, Digital Confectioners were brought on board to re-tune and finish the game.

EUROPEAN STEAM GIFT : It’s a steam gift for Europe which requires an European IP address to activate and to play Depth on Steam. Read carefully the store description about region and language restrictions.
STEAM GIFT : A Steam gift is a one-time transfer you receive. You activate and install Depth to play on Steam, it is a non-refundable game that stays in your Steam games collection. Please read the store description about any language or region restrictions.
STEAM CD KEY : Use the Steam Key Code on Steam Platform to download and play Depth. You must login to your Steam Account or create one for free. Download the (Steam Client HERE). Then once you login, click Add a Game (located in the bottom Left corner) -> Activate a Product on Steam. There type in your CD Key and the game will be activated and added to your Steam account game library.
Collector Edition
Pack X4
Standard Edition

very funny, if you like these kind of games. Do watch the trailer to get a feeling.

welp ! gonna have to play someone in my mouth