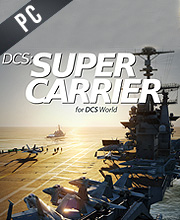 What is DCS Supercarrier CD key?

It's a digital key that allows you to download DCS Supercarrier directly to PC from the official Platforms.

How can I find the best prices for DCS Supercarrier CD keys?

Allkeyshop.com compares the cheapest prices of DCS Supercarrier on the digital downloads market to find the best sales and discount codes on trusted stores.

This is a downloadable content so the base game which is DCS: World is needed in order to play the game.

Offering the most detailed as well as a realistic simulation for the Nimitz-class aircraft carrier. This is a nuclear-powered fortress at sea that has a crew capacity of 6,000 sailors and airmen. The flight deck is massive having the capacity of up to 90 aircrafts. Its defense system powerful having RIM-7 Sea Sparrow Missile and RIM-116 Rolling Air Frame Missile (RAM) missiles, and a Close-In Weapon System (CIWS) gun system. This will also include the CVN-71 Theodore Roosevelt, CVN-72 Abraham Lincoln, CVN-73 George Washington, CVN-74 John C Stennis, and CVN-75 Harry S Truman. This downloadable content also includes high-resolution textures with realistic weathering and markings, various animations, detailed lighting systems, functional air defense weapon systems, deck parking, dynamic carrier radio communications, static deck vehicles and so much more.

Zoom 1m 3m 1y All
Track product
STEAM GIFT : A Steam gift is a one-time transfer you receive. You activate and install DCS Supercarrier to play on Steam, it is a non-refundable game that stays in your Steam games collection. Please read the store description about any language or region restrictions.
STEAM CD KEY : Use the Steam Key Code on Steam Platform to download and play DCS Supercarrier. You must login to your Steam Account or create one for free. Download the (Steam Client HERE). Then once you login, click Add a Game (located in the bottom Left corner) -> Activate a Product on Steam. There type in your CD Key and the game will be activated and added to your Steam account game library.
DLC
Compare Choose & Buy Download (772)