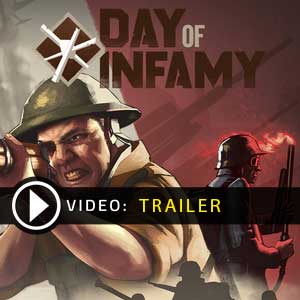 What is Day of Infamy CD key?

It's a digital key that allows you to download Day of Infamy directly to PC from the official Platforms.

How can I find the best prices for Day of Infamy CD keys?

Allkeyshop.com compares the cheapest prices of Day of Infamy on the digital downloads market to find the best sales and discount codes on trusted stores.

Day of Infamy is an action, strategy video game developed and published by New World Interactive.

Experience World War II once again and battle through war-torn Europe. Offering you a teamwork oriented shooter, you must defend the line, radio in for support, torch the enemy, storm the beach and much more.

Choose from the nine specialized player classes available. Create your fleet with the seven-player-versus-player mode or the three cooperative modes to be played against AI. Finish the 14 different levels all based on World War II battles.

Of course, all weapons are based on the World War II theme which includes a Thompson submachine gun to PIAT bomb launchers to flamethrowers to FG42 auto rifles. There will also be grenade launchers, Bayonetta’s, stripper clips, cloth wraps, extended magazines and so much more than you are able to customize.

Teamwork is the key to winning. You can call on them for any type of support like fire support, explosives, smoke or bombings. Rise through the ranks and choose which one you would want to represent: US Army, British Commonwealth or the German Wehrmacht.

Get to enjoy all content updates that include traps and other features. Community made mods, character skins, weapon skins, sound packs and more are also available.

EU STEAM CD KEY: Requires an EUROPEAN IP address or you must activate it with a VPN (Virtual Private Network) in order to play Day of Infamy. Might have languages restrictions or language packs. Read the description on the store game page to know if the EU IP is only needed for activation or for playing also (maybe on EU Servers). Most of the stores offer you their help, or show you how to do this with a tutorial to follow.
EUROPEAN STEAM GIFT : It’s a steam gift for Europe which requires an European IP address to activate and to play Day of Infamy on Steam. Read carefully the store description about region and language restrictions.
STEAM GIFT : A Steam gift is a one-time transfer you receive. You activate and install Day of Infamy to play on Steam, it is a non-refundable game that stays in your Steam games collection. Please read the store description about any language or region restrictions.
STEAM CD KEY : Use the Steam Key Code on Steam Platform to download and play Day of Infamy. You must login to your Steam Account or create one for free. Download the (Steam Client HERE). Then once you login, click Add a Game (located in the bottom Left corner) -> Activate a Product on Steam. There type in your CD Key and the game will be activated and added to your Steam account game library.
Deluxe Edition
Pack X4
Standard Edition